This is one of the most profound movies ever made and considered a classic among movie buffs. The movie was banned in Germany shortly after release and confiscated by the government. The film maker was able to get a copy and ship it to South America where it sat for many years. Later, this copy was restored, most of the movie remained intact. Here’s the wiki on it:

Metropolis is a 1927 German expressionist science-fiction drama film directed by Fritz Lang. Written by Thea von Harbou in collaboration with Lang,[5][6] it stars Gustav Fröhlich, Alfred Abel, Rudolf Klein-Rogge,and Brigitte Helm. Erich Pommer produced it in the Babelsberg Studios for Universum Film A.G. (UFA). The silent film is regarded as a pioneering science-fiction movie, being among the first feature-length movies of that genre.[7] Filming took place over 17 months in 1925–26 at a cost of more than five million Reichsmarks.[8]

Made in Germany during the Weimar period, Metropolis is set in a futuristic urban dystopia and follows the attempts of Freder, the wealthy son of the city master, and Maria, a saintly figure to the workers, to overcome the vast gulf separating the classes in their city and bring the workers together with Joh Fredersen, the city master. The film’s message is encompassed in the final inter-title: “The Mediator Between the Head and the Hands Must Be the Heart”.

Metropolis met a mixed reception upon release. Critics found it visually beautiful and powerful – the film’s art direction by Otto Hunte, Erich Kettelhut, and Karl Vollbrecht draws influence from Bauhaus, Cubist, and Futurist design,[9] along with touches of the Gothic in the scenes in the catacombs, the cathedral and Rotwang’s house[3] – and lauded its complex special effects, but accused its story of being naive.[10] H. G. Wells described the film as “silly”, and The Encyclopedia of Science Fiction calls the story “trite” and its politics “ludicrously simplistic”.[3] The film’s alleged Communist message was also criticized.[11]

The film’s extensive running time also came in for criticism, and Metropolis was cut substantially after its German premiere, with a large portion of Lang’s original footage removed. Many attempts have been made since the 1970s to restore the film. In 1984, Italian music producer Giorgio Moroder released a truncated version with a soundtrack by rock artists including Freddie Mercury, Loverboy, and Adam Ant. In 2001, a new reconstruction of Metropolis was shown at the Berlin Film Festival. In 2008, a damaged print of Lang’s original cut of the film was found in a museum in Argentina. After a long restoration process that required additional materials provided by a print from New Zealand, the film was 95% restored and shown on large screens in Berlin and Frankfurt simultaneously on 12 February 2010.

Metropolis is now widely regarded as one of the greatest and most influential films ever made, ranking 35th in Sight & Sound‘s 2012 critics’ poll.[12] In 2001 the film was inscribed on UNESCO‘s Memory of the World Register, the first film thus distinguished.

In the future, in the Million-acre city of Metropolis, wealthy industrialists and business magnates and their top employees reign from 50 to 1,000-story skyscrapers, while underground-dwelling workers toil to operate the great machines that power the city. Joh Fredersen is the city’s master. His son, Freder, idles away his time at sports and in a pleasure garden, but is interrupted by the arrival of a young woman named Maria, who has brought a group of workers’ children to witness the lifestyle of their rich “brothers”. Maria and the children are ushered away, but Freder, fascinated, goes to the lower levels to find her. On the machine levels, he witnesses the explosion of a huge machine that kills and injures numerous workers. Freder has a hallucination that the machine is a temple of Moloch and the workers are being fed to it. When the hallucination ends and he sees the dead workers being carried away on stretchers, he hurries to tell his father about the accident. Fredersen asks his assistant, Josaphat, why he learned of the explosion from his son, and not from him.

Grot, foreman of the Heart Machine, brings Fredersen secret maps found on the dead workers. Fredersen again asks Josaphat why he did not learn of the maps from him, and fires him. After seeing his father’s cold indifference towards the harsh conditions they face, Freder secretly rebels against him by deciding to help the workers. He enlists Josaphat’s assistance and returns to the machine halls, where he trades places with a worker.

Fredersen takes the maps to the inventor Rotwang to learn their meaning. Rotwang had been in love with a woman named Hel, who left him to marry Fredersen and later died giving birth to Freder. Rotwang shows Fredersen a robot he has built to “resurrect” Hel. The maps show a network of catacombs beneath Metropolis, and the two men go to investigate. They eavesdrop on a gathering of workers, including Freder. Maria addresses them, prophesying the arrival of a mediator who can bring the working and ruling classes together. Freder believes he could fill the role and declares his love for Maria. Fredersen orders Rotwang to give Maria’s likeness to the robot so that it can ruin her reputation among the workers to prevent any rebellion. Fredersen is unaware that Rotwang plans to use the robot to kill Freder and take over Metropolis. Rotwang kidnaps Maria, transfers her likeness to the robot and sends her to Fredersen. Freder finds the two embracing and, believing it is the real Maria, falls into a prolonged delirium. Intercut with his hallucinations, the false Maria unleashes chaos throughout Metropolis, driving men to murder and stirring dissent among the workers.

Freder recovers and returns to the catacombs. Finding the false Maria urging the workers to rise up and destroy the machines, Freder accuses her of not being the real Maria. The workers follow the false Maria from their city to the machine rooms, leaving their children behind. They destroy the Heart Machine, which causes the workers’ city below to flood. The real Maria, having escaped from Rotwang’s house, rescues the children with Freder’s and Josaphat’s help. Grot berates the celebrating workers for abandoning their children in the flooded city. Believing their children to be dead, the hysterical workers capture the false Maria and burn her at the stake. A horrified Freder watches, not understanding the deception until the fire reveals her to be a robot. Rotwang is delusional, seeing the real Maria as his lost Hel, and chases her to the roof of the cathedral, pursued by Freder. The two men fight as Fredersen and the workers watch from the street. Rotwang falls to his death. Freder fulfills his role as mediator by linking the hands of Fredersen and Grot to bring them together. 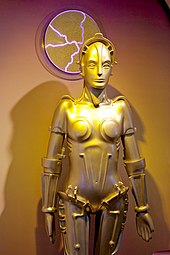 A replica of the Maschinenmensch (Machine-Person), on display at the Robot Hall of Fame in the Carnegie Science Center, Pittsburgh, Pennsylvania
(Visited 8 times, 1 visits today)
Show more

Murder on the High Seas aka Love Bound (1932) Drama, Mystery

Over 3,000 Movies posted on this site for your enjoyment. Please bookmark this site and share it with your friends! Thank you.